When we arrived at Mt. Calvary and looked around, we saw lots of the mother's milk on the inside of the acrylic wall installed around the image of Jesus on the Crucifix to protect the image. While we were taking a look at the mother's milk, fragrant oil also came down and wetted many spots on the inside of the transparent acrylic wall. Seeing this, the priests, volunteer helpers, and I repeatedly shouted for joy and amazement, 'Ah! I see it here, too' ' Oh! It's there, too. ' 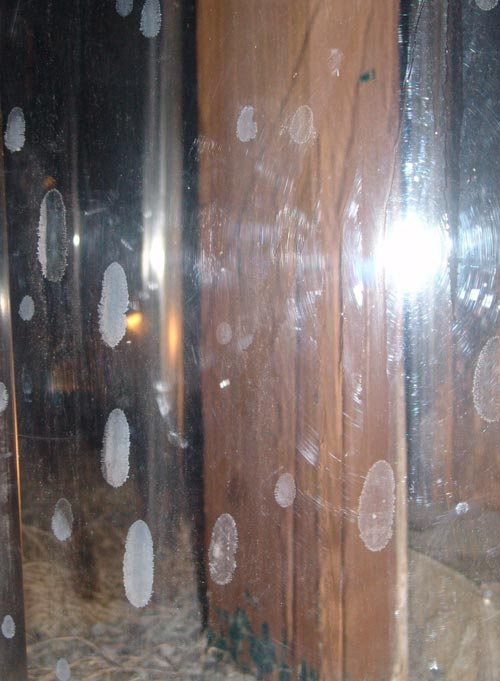 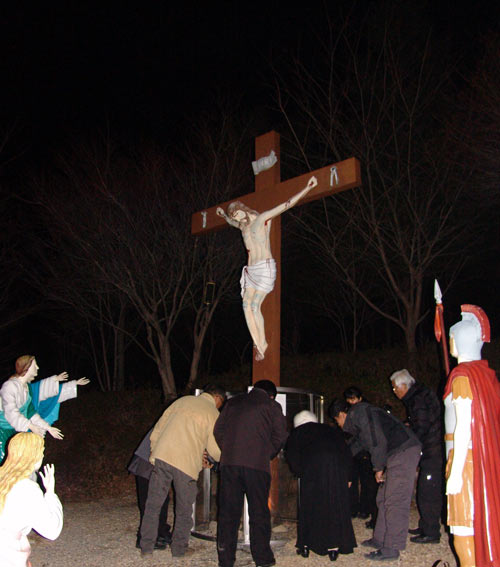 At the beginning of Lent, the Lord and the Blessed Mother showed the utmost love

by descending Blessed Mother's Milk and Fragrant Oil came down on the area of Crucifix at Mt. Calvary.

When I looked at the image of Jesus on the Crucifix, I saw some tears formed in His right eye and flowing down. Some drops of thick body fluid had also formed on the hems of the cloth. At that moment, Jesus began speaking anxiously but very tenderly. 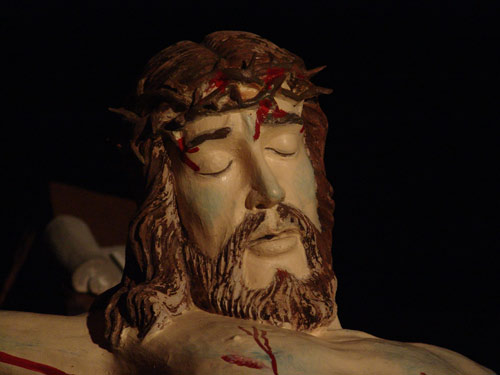 “My little soul whom I love so intensely and who graciously offers up extremely painful death agonies for the repentance of even the wickedest sinners! And all My beloved clergy, religious, and children who follow Me and My Mother and are being persecuted!

At this time faced with the threat of massive degradation and the danger of destruction, God the Father's just wrath has risen high in the heavens, and it is now the moment just before the descent of the chastisement. That is why the pains of double deaths that My little soul suffers are becoming more severe.

I and My Mother Mary have been showing unceasingly the unprecedented miracles in Naju that have not been shown until now and anywhere else in the world, through the sufferings of reparations by My little soul who has been called to a great role, accompanied by her entreaties and sacrifices filled with love, so that the sinners may repent and lead a new life of resurrection.

However, even the large majority of the shepherds who have been installed and anointed remain unawake and are leading the herds of numerous sheep to the road to hell. I cannot just look on this any longer. On the other hand, how can I refuse the request of My Mother who can divert even God the Father's wrath?

The materialistic civilization has been advancing to a high degree, but, spiritually, the human race has already become covered all over with wounds. Despite the reality that they are faced with the danger of having to live on barren wastelands and the calamity that cannot be avoided, they are leading an easygoing life, singing of peaceful and happy times.

Nevertheless, as they should not be left to perish as in the age of Sodom and Gomorrah or at the time of Noah and the Deluge, at least you who are supposed to know Me and My Mother should not forget that you have been chosen as good grains, always remain awake, arm yourselves with the prayers of life, and, thus, prevent them from building, with unbounded pride, a second Tower of Babel, and perpetuate the Paschal Mystery of the Last Supper and the Paschal Mystery of the Resurrection so that you may punish the devils of division that fill the sky and the earth.

I will always watch and protect your every move and rescue you safely from the sudden crisis, where the situation can be so urgent that you are unable to do anything, so that you may not be hurt, as you work for Me and My Mother, offering up sacrifices and reparations.”

When Jesus ended speaking, the Blessed Mother began speaking kindly but in a sad tone.

“My beloved daughter who only wishes the sinners to repent and has to suffer pains! You, who have been specially called to (let more people) escape from the calamity that will come, have been cruelly despised and insulted, suffered the terrifying pains of your heart being pierced and your legs and arms being twisted, and yet have graciously offered them up. For that reason, have not the little souls been gathering in Naju and praying, following your example? That is why God has been delaying the release of His just wrath.

My little soul who has been offered up (as a victim) at every moment with the pains of martyrdom that has been leading you to double deaths! Because of this, I am grateful to you and also feel sorry to you, but how many children are there who are willing to be martyred for the conversion of sinners? So, what else can I do?

When the unprecedented miracles that my Son Jesus and I have been doing in Naju are accepted by the Holy Catholic Church, my Son Jesus' and my Love will flame up vigorously, the new buds will sprout even on the burnt ground, and God's cup of blessing instead of the cup of wrath will be bestowed on you. As you are suffering such extreme pains for that day, I want you to even more graciously offer them up.

All the children in the world whom I love! As the world is overflowing with great degradation and ever increasing sins, it is being faced with the danger of destruction. For this reason, the sacrifices and the prayers of love by you who have been called and gathered through my little soul are most urgently needed now, which is the time to enter into battle. Repent. If (people) do not fear God's just wrath, do not accept the messages of love that my Son Jesus and I have been giving them, and ignore the warnings about the disasters, a terrifying calamity due to God's wrath will descend upon them. Therefore, arm yourselves with the prayers of life every day and at every moment so that the calamity may not befall you.

Now this world is so filled with sins that it is just before the descent of the punishment. Even so, even my priests and children who have been called are compromising with errors and injustice, contradicting and defying God, despite my appeals and warnings filled with love. Because my Son Jesus and I cannot look at this with open eyes, Our Hearts are vigorously flaming up and becoming an active volcano.

I have at numerous times told you, even showing the numerous unprecedented signs and repeating the same words, what the countermeasures are against the many calamities that continue to occur at various places in the world. Nevertheless, the Gwangju Archdiocese has not heeded the repeated warnings and, far from approving (the facts of Naju), has not even contemplated investigating them but has only fabricated falsehoods by cunningly distorting words and, thus, has been playing the roles of Judas and Cain. How can God be not angry? If they keep their mouths closed, even the stones will shout. Therefore, they must hurriedly accept the words of my Son Jesus and this Mommy who is the Co-Redemptrix and, thereby, correct and straighten up the wrongs for the salvation of the world.

In this extremely important time when the cup of God's wrath is already flowing over, you, who have been called, must spread the messages of love courageously as the final efforts for the salvation of the world by displaying the spirit of martyrdom so that the clergy and children in the whole world may accept the will of this Mother who is so anxious.

The clergy and children who follow me are extremely few, even though the acceptance and practice of the messages of love from my Son Jesus and me given through my beloved daughter can become the shortcut to the spiritual and physical healing and to Heaven. That is why the pandemonium of great calamities that Satan cruelly desires with the intention of leading all of the souls to perdition is occurring endlessly. However, if Naju is approved and all of the clergy and children in the world accept and practice the messages of love that have been given through my little soul, the cup of God's wrath will cease, the new day will break, and the Lord's Kingdom will come.

All of my beloved children! Because the cup of God's wrath is now flowing over, a stern warning from God will descend within a short time and many people will tremble with fear. Impress it on your minds that there is no more time to hesitate and procrastinate. At this time when major calamities are coming down here and there in the sky, on the ground, and in the sea, I wish you, who have responded with Amen, to totally subject even your free will to me, become submerged, completely dissolved, and united in the Sacred Hearts of Jesus and me, and work.

You who follow my Son Jesus and me should not worry but display the power of love more vigorously and work heroically and most loyally. If you, who have been called as my true sons and daughters, only do not turn your backs, you will be protected and guarded in my Son Jesus and my mantle regardless of what calamities of nature may occur and, on the last day, will be escorted by the angels into Heaven, which is the Kingdom of the Lord filled only with joy, love, and peace, and will enjoy eternal happiness.”

(Translator's note: One day after the above messages were received by Julia Kim (March 11, 2011), a massive earthquake occurred in Japan, fulfilling the Blessed Mother's prediction that a stern warning from God would descend within a short time.)

0
April 22, 2011 - Deal with the difficult situation with the utmost devotion mobilizing all your heart and strength for the accomplishment of My Mother Mary's Triumph, before December 8, 2010 - Grace from My Sacred Heart, will flow into the numerous souls like a river
List New post