Messages from God the Father and Jesus

While suffering the pain that had been continuing since last night, I felt as if blood was trickling down from my head. I touched my head with my fingers, but they did not become stained with any blood. I arrived at the Blessed Mother’s Mountain shortly after 3 p.m., even though I had said that I would be there by 2:30 p.m. at latest. As soon as I got out of the car, the pain increased enormously. As I was walking for a while supported by others, the pain caused by the Crown of Thorns began and bleeding from the forehead also began. Before the place where the little stones stained with the Lord’s Precious Blood are being preserved, the intense pain from scourging also began.

While I was climbing the Way of the Cross participating in the Sufferings of Jesus, more blood flowed down from the wounds caused by the thorns and, because of this, I could not see anything. Many people said that I should not climb the Way of the Cross any further. However, offering up the pain for the Holy Father, the successor of St. Peter who is the rock on which the Church was built, and for all the clergy in the world so that they may fully discharge their duties as ministers of the Lord, and gladly offering it up for the pilgrims gathered there and for the repentance of sinners, I wore the Crown of Thorns and carried a cross. 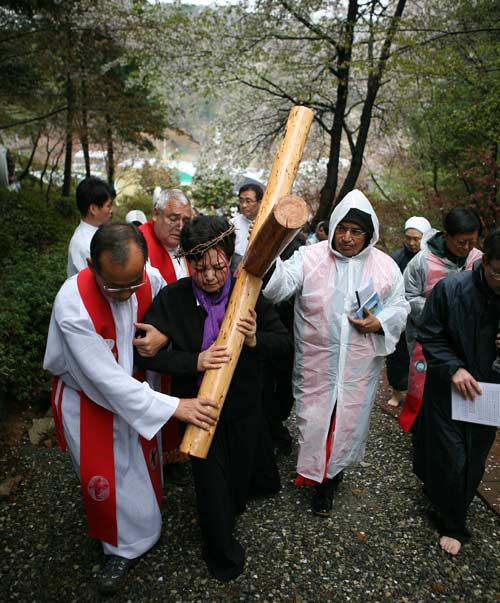 When I fell at the Third Station, the thorns on the Crown of Thorns pierced deeply into my scalp, but, because the pain from scourging was so extreme, I could not even feel the pain from the thorns. At the Twelfth Station, all the energy in my body drained away and I intuitively felt that I was dying and prayed: “Father, receive my soul. Through my death, grant that Naju will be approved as soon as possible and let the children in the whole world be saved. Especially, I offer up myself for the sanctification of the Holy Father and all of the clergy in this world.” Then, I lost consciousness. At that moment, I saw brilliant light radiating and faintly heard some music as if from a military band. In a moment, I realized that I was standing before God the Father. 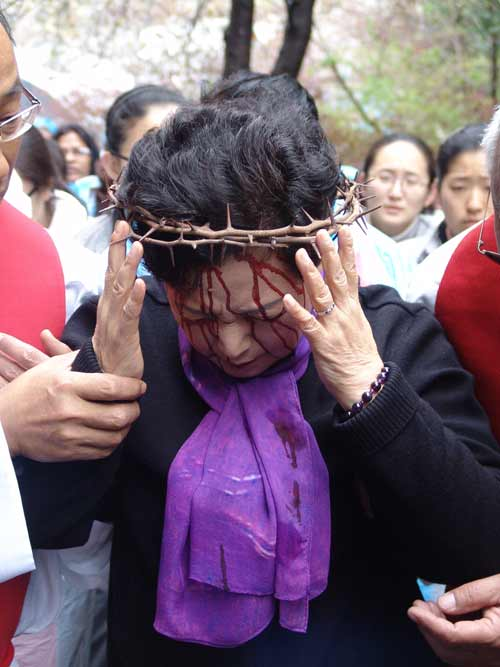 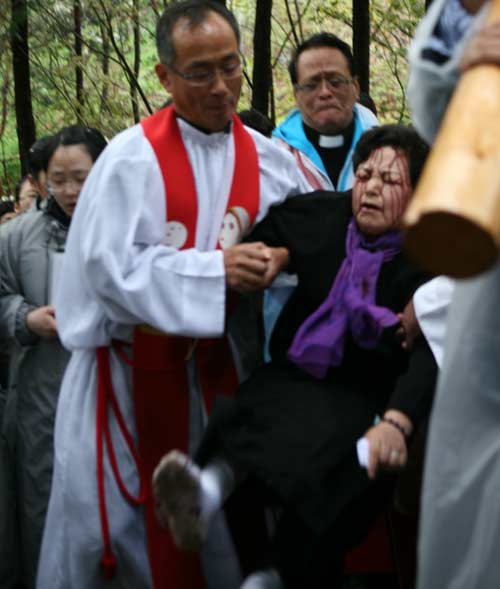 At the 7th station, she floated in the air

due to severe scourging pain and collapsed. 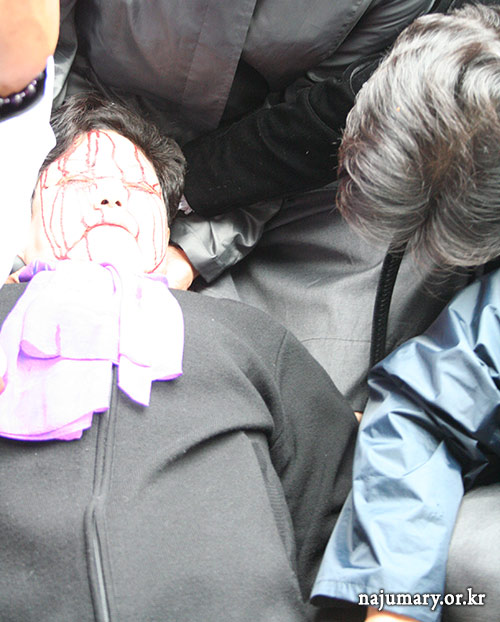 Julia Kim collapsed at the 12th station and then she died and went to God the Father.

to ashes, so returned to the world and cried out. And He raised her to life again. Jesus gave

her Message of Love that He will be with her for all eternity. At that moment, the sky which

had been dark became bright, the clouds dispersed, and the sun radiated brilliant light.

“Child! How are you able to suffer the pain even laying down your life and not refusing the cup of such severe suffering?”

“This lowly sinner only did what I was supposed to do.”

“Baby! I wish to send down the chastisement on this world filled with sins, but I cannot strike with my hand of justice lifted high because there is a little soul like you who so generously laid down even your life.”

“Father! I fall so short of what I am supposed to do. It is my wish that the clergy fulfill their duties as the Lord’s ministers and lead the herds of sheep, which have lost their ways and are wandering, to the correct way and, thus, the whole world repent."

“Well, in that case, return to the world and cry out. If there were no soul like you in the world who is totally loyal and render completely devoted service to Me, the world filled with pitch-black darkness would be reduced to ashes. Therefore, I will give you one more chance. Go out and cry out without delay.”

Then, I saw God the Father breathe into me and give a blessing stretching His hands toward the world. At that moment I regained consciousness and saw the black curtain in the sky being lifted and brilliant light radiating down like the sunlight on those who were praying and on the entire Blessed Mother’s Mountain. I cried out inside me: “Oh, my Lord and my Love! Even with one drop only of the Precious Blood that You shed, You can save the whole world. As I am totally Yours, use me according to Your Will. Make use of my little sufferings as the Lord wishes so that none of them would be wasted.” At that moment, I heard the loving and kind voice of Jesus.

“Of course, I will do so. My beloved little soul who joyfully and wholeheartedly devotes herself to Me and obeys Me! You have not spared yourself in participating in My Sufferings that I endured with My best efforts to save the human race. This world, which has become as corrupt as it can ever be, violating even the stern dignity of God the Father, cannot escape the disaster of the sulfuric fire that flames up violently, but, because the sounds of prayers have been soaring to the sky, which have been offered up by the souls who pray in imitation of a little soul like you who prays with the most earnest devotion, God the Father is delaying to release the cup of just wrath.

My little soul whom I love so much! My beloved baby who has chosen the way of participating in My Suffering and being cruelly treated as a true citizen of God(’s Kingdom)! With the most earnest devotion with which you have always confessed that you are a sinner who falls short of your duties and drawn closer (to Us), you have become a sweet rain that gently moistens the wounded Mind of God the Father and the Hearts of Me and My Mother which have turned into active volcanoes and the enormous sorrows have made Us feel that Our spirits have become lost and Our insides have been cut into pieces. Together with My Mother, I will always guard and protect you. Therefore, do not lose courage, be thrown into confusion, or become restless in any circumstances, but totally rely on Me and My Mother with trust. Then, We will protect you and take care of your every move so that nobody can encroach on you.

My beloved priests and children who rushed to this place responding to My and My Mother’s call with an Amen! As, two thousand years ago, the high priests who accused me of all kinds of crimes for the purpose of killing Me were like a lake into which water flows but out of which water does not flow. Likewise, the Gwangju Archdiocese’s determination to fight to the death, with which they have joined forces with the Masons, is driving Me toward a double death. Therefore, at least you who know Me should not be shaken like a boat that is being tossed in all directions by winds, but throw away all anxieties and doubts through a great understanding and, thus, help the little soul whom I have chosen, and deal with the difficult situation with the utmost devotion mobilizing all your heart and strength for the accomplishment of My Mother Mary’s Triumph, before which there is not much time left.

Now, even the shepherds whom I have personally anointed and installed have degraded themselves to be hounds of the devil who will be defeated. Thus, their corruption has become worse day after day, the hours of apostasy and disloyalty have drawn closer, and even the Church that I built has reached the edge of a precipice.

Being not awake spiritually and joining forces with the devil of division, they are seducing people and, with clever words, are patching up falsehood as if it were truth and are uttering unreasonable words as if they were reasonable and correct, but it will soon be disclosed that their obstinacy has actually been recklessness and it will also be surely revealed that their power sustained by their self-inflicted inconsistency has also been a shallow trick that has already been widely known.

In spite of this, if they refuse to accept Me and My Mother to the end, I will also say that I do not know them on the last day. Therefore, pray for them. While they are bringing about their own destruction like this, you are not listening to their words but are gathering here and praying with a heart of offering up sacrifices and reparations. In so doing, you have become the tailors of love who sew up the Sacred Heart that has been torn apart in pieces and so miserable that one cannot even look at It.

My ministers and all the children whom I love so dearly! As you are lovable children who sought and came to this holy city prepared by Me and My Mother, you will see your Lord, God, before long. On that day, I will let new wine flow on every mountain and let milk and honey overflow on every hill, and I will be with you for all eternity.”

When Jesus finished speaking and I opened my eyes, the sky which had been dark became bright, the clouds dispersed, and the sun radiated brilliant light.

0
April 18, 2014 - So that all the children of this world may be perfectly armed with the Five Spiritualities that you have been exclaiming in Naju, propagate and widely spread them. March 10, 2011- All of my beloved children! Because the cup of God's wrath is now flowing over, a stern warning from God will descend within a short time
List New post