Message of Love from the Blessed Mother
received by Julia Kim of Naju, Korea on March 4, 2022

The Blessed Mother : “My beloved little soul, My adorable daughter!
While participating in the dying pains that My Son Jesus has suffered for the salvation of humanity, you are totally exhausted (氣盡脈盡) from the pains as if your flesh and bones were being cut off (刻肌削骨) and yet graciously offering up those countless pains, My pitiful little baby! I am sorry and thank you. 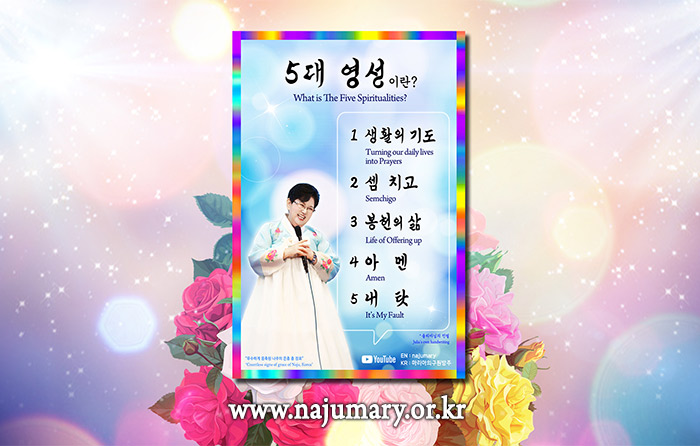 Falling into My enemy’s crafty scheme, more and more souls are heading for perdition. Thus, the sacrifice to the extent of laying down your life is necessary.

For the sake of world peace, you are offering your sufferings so that wars would not happen anymore, and you are ready to die to work for the Lord (以死爲限) with the heart of great integrity and loyalty (忠義之心) for the repentance of sinners. Such gracious oblation through the Five Spiritualities that is offered with your tears and pleas as a living sacrificial victim is a consolation to My Son and Me.

Amid those excruciating pains, you do not complain and do all you can to fulfill the work that is entrusted to you. Witnessing your admirable efforts, God the Father has withheld His just anger even for a moment and is comforted. Therefore, you must never lose your courage and strength.

Do not forget that God has already clothed you with the garment of immortality purified by the Blood of the Lamb and that this Mother is preparing a home for you to rest in, thus offer up your sufferings more graciously. Always remember that because of you, a little soul, who is never afraid of terrible death for the work of the Lord(肝腦塗地), and who does not avoid any threat of death(死且不避), and because of the little souls who follow you and strive to practice the Five Spiritualities, God the Father is holding back His cup of wrath. Thus, be strong! 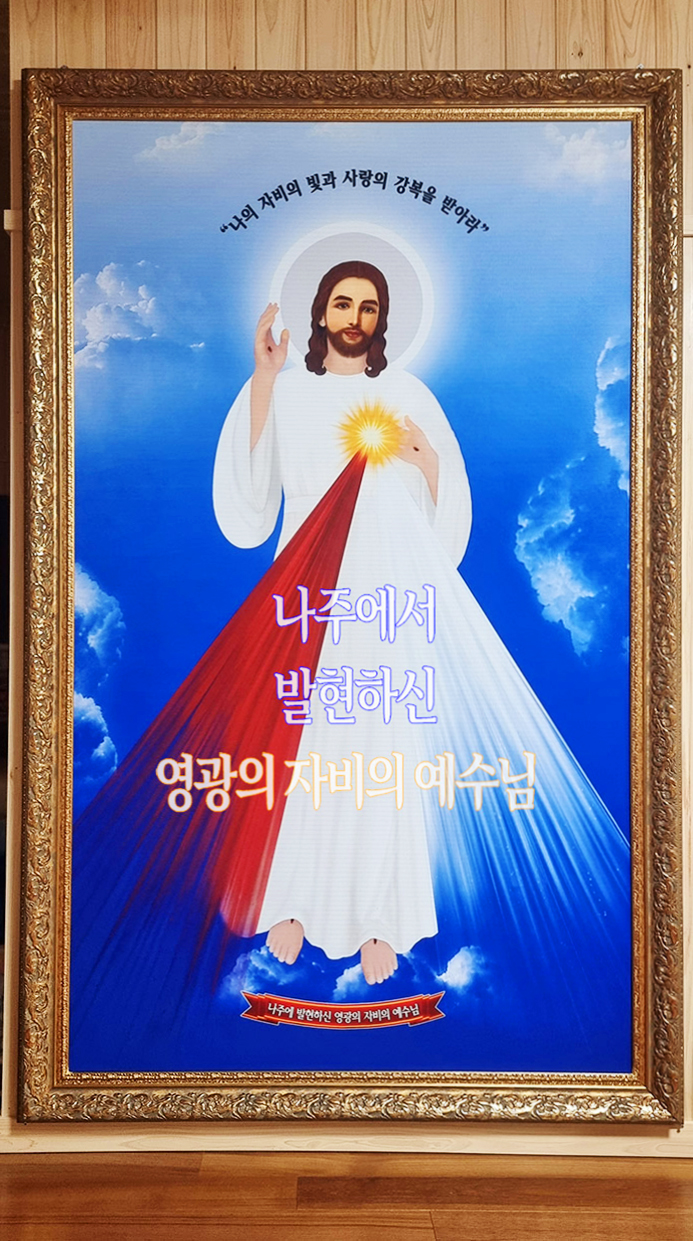 All My beloved children in the world!
I always pray with you when you pray to Jesus of Mercy in Glory. Pray with Me often to Him for the repentance of sinners, asking for His Mercy upon them.

In this age, the violent Satan is rampantly trying to gain control over the humans by making use of the humans' power. The world is threatened under a black cloud, and the great unforgivable sins (罔赦之罪) are spreading like a dreadful cancer. As such, the storm has already grown in force and the world is in grave danger.

Facing great trials like the threats of violence, wars and mass destruction, it is not far-off from the time of tremendous punishment like hell even upon those countries which have been intensely cherished and protected so far.

Even if the great disasters are approaching near (禍色迫頭), if My countless children remain stubborn by rejecting God, and join forces with the devils who fill the sky and earth, the corruption in the world will increase day by day, and the threat of violence will prevail, and thus wars may occur frequently.

As I have menti 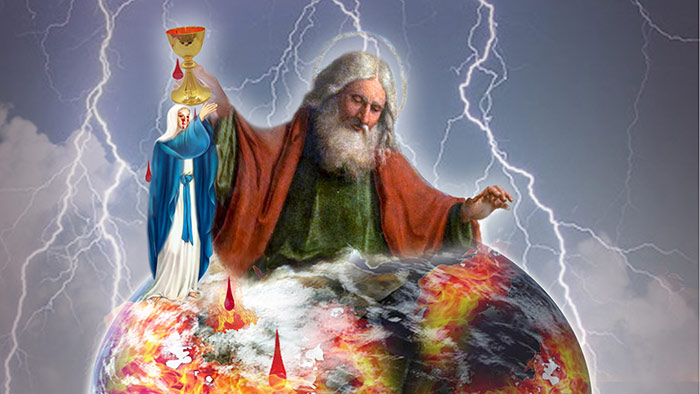 oned previously, if they do not accept the Words of My Son Jesus and I, and do not practice the Five Spiritualities, the world will turn into seas of fire through a Third World War and be led to destruction. For the God of love can also be a God of wrath.

Thus, My children!  There is no time to hesitate and to procrastinate. Let all My children pray five more decades of Rosary, and practice the Five Spir 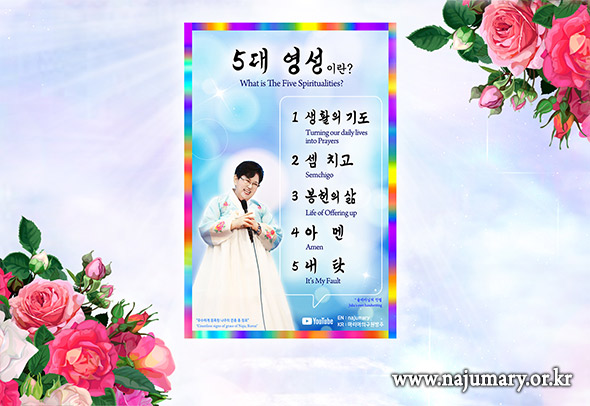 itualities so that a Third World War may not occur and world peace be established. Turning your lives into Prayers helps you stay awake all the time. Even though it may seem trivial, it will lead you to be consecrated in My burning Immaculate Heart. Therefore, turn every moment of your lives into prayers. It might look insignificant initially but subsequently, it will manifest tremendous differences(毫釐千里), and you must cast away your stubbornness and ego and fully arm yourself with the Armor of the Five Spiritualities.

When the prayers of the little souls who practice the Five Spiritualities in unity with my little soul in one heart and strength for the salvation of the world will soar high into the sky, even in the face of the threat of a dreadful nuclear war which will generate fear, My Immaculate Heart will surely triumph and the love and peace will come to the entire world.

Even if the world that provokes God, failed to repent, and thus the world becomes a sea of fire through a Third World War with raging waves threatening to sweep away the world, for the souls who are united with my little soul in practicing the Five Spiritualities and spreading them and following my Son Jesus and Me, I will spread out my mantle and hide them in the safe refuge of My Immaculate Heart and will surely save them. 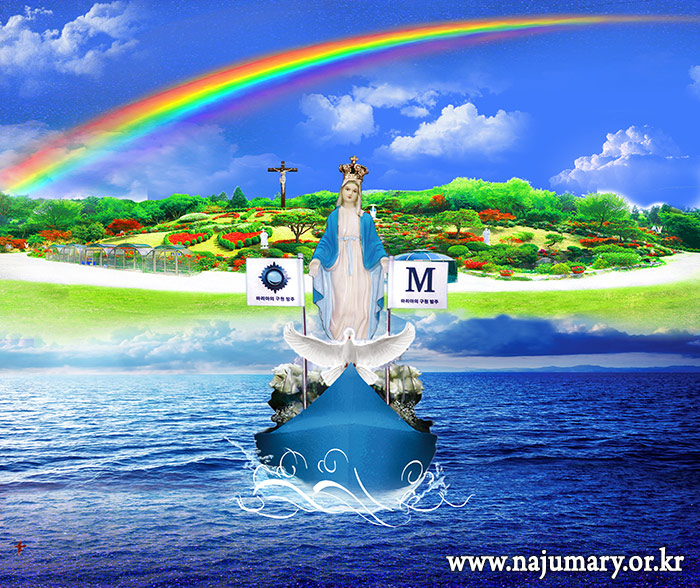 Then on the last day, you who trust the little soul I have chosen and who follow My Messages of Love will enjoy eternal happiness in Heaven with the fullness of joy, love, and peace, and you will pick and eat the fruits from the tree of eternal life.”

Explanation for the Chinese words used in Message of Love

기진맥진(氣盡脈盡) : Completely exhausted of one’s energy and will power

충의지심(忠義之心) : A loyal and righteous heart

이사위한(以死爲限) : Doing something and ready to face possible death.

Never giving up on something even until death.

사차불피(死且不避) : Not avoiding something even one’s death

망사지죄(罔赦之罪) : Sin that cannot be forgiven

화색박두(禍色迫頭) : Drawing near of catastrophes

동심동력(同心同力) : In one heart and strength

0
Message of Love from the Blessed Mother received by Julia Kim of Naju, Korea on March 20, 2022 December 23, 2021 - Be united with My little soul and arm yourselves with the Armor of the Five Spiritualities and practice it.
List New post