Message of Love from Jesus received
by Julia Kim of Naju, Korea on August 25, 2020 (PDF)

In this challenging time for all the people because of the COVID-19 pandemic throughout the entire world, I went on the brink of death while praying for the repentance of the people in this world by offering up the excruciating pains that correspond to their conversion. But on August 15 this year, Jesus gave me one more chance (for the salvation of all human race), so I came back to life.

Then one day, while praying, I vaguely saw a vision of the Blessed Mother’s Mountain and Annex Building to the Chapel in Naju which is under construction, being damaged by a typhoon. Two days later, I learned from news reports that Typhoon Bavi, the most powerful typhoon since 2000, was heading north towards Korea. 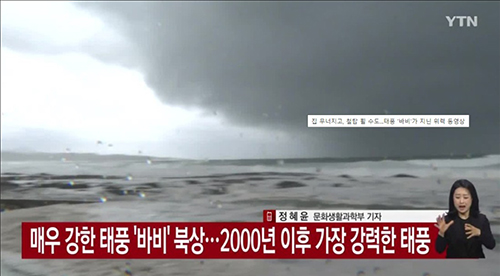 The powerful Typhoon Bavi is moving north toward
South Korea. the most powerful typhoon since 2000 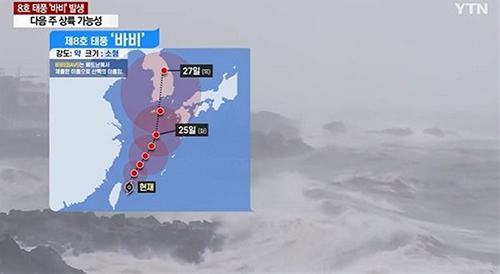 The season's 8th typhoon, Typhoon Bavi is expected
to make a possible landfall in S. Korea, next week. 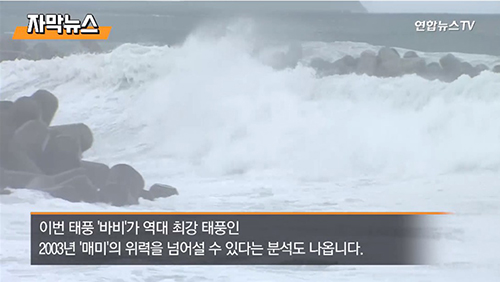 A meteorological analysis reported that this typhoon
could break the record set by Typhoon Maemi in 2003,
a very strong and powerful storm until this today. 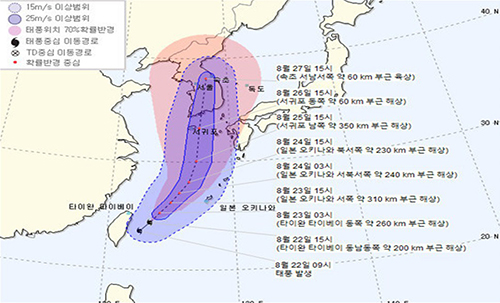 Since then, my pain became more extreme. I received the Sacrament of Anointing of the Sick from a priest several times, and I prayed, ‘Jesus, I offer all these pains to You. Please do not let Naju Shrine which lies on the path of the incoming typhoon be damaged just as You have protected this Naju Shrine from the great and heavy rainfall in 1989, and from all other natural disasters until now. Please also protect our country.’ 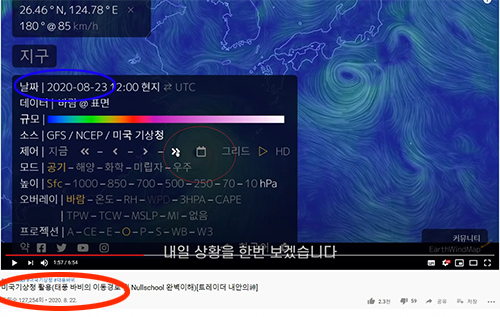 Let's have a look at the situation tomorrow. 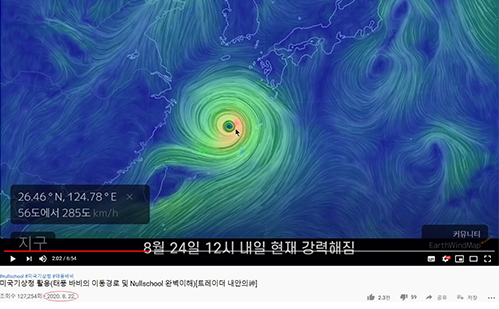 At 12 noon, on Aug 24, the typhoon was reported
to have picked up more power and is getting stronger 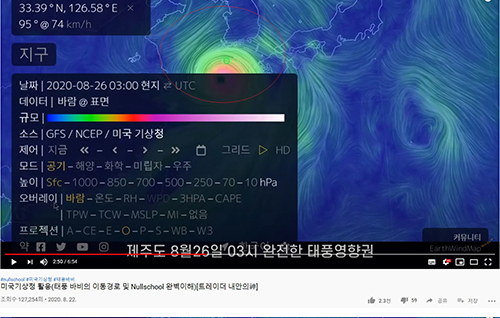 Jeju Island is under the forceful influence of the typhoon at 3:00 on Aug 26 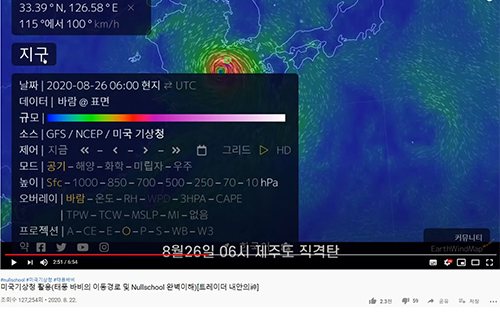 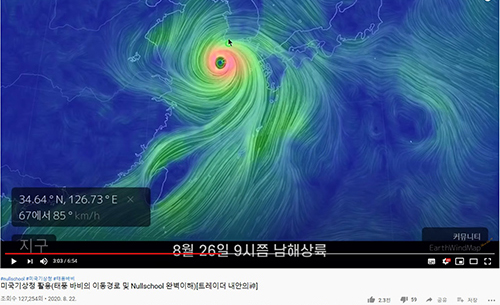 The typhoon makes a landfall in the Southern Coast of around 9 a.m. on Aug 26 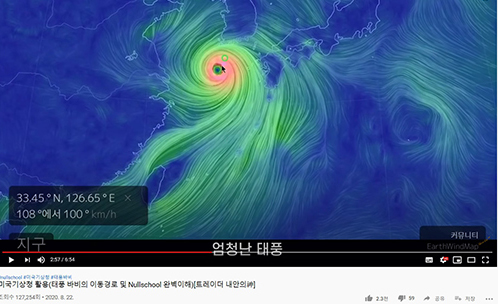 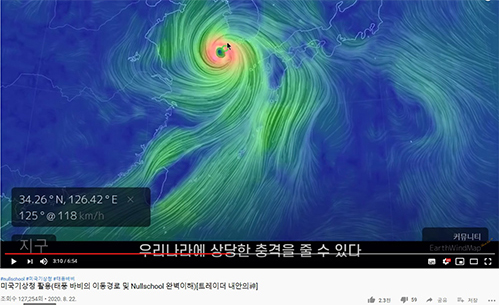 It can bring significant damages to S. Korea.

As I prayed, I offered up the pain of crossing death that was hard to regain consciousness. Even the narcotic analgesic that I took several times were useless and I was struggling in great pain all through the night that stretched for days. In the meantime, I continued to anxiously call upon Jesus and prayed while looking toward the computer screen showing the news on the expected path of Typhoon Bavi, “Please turn the typhoon further to the left.” To my surprise, the expected route of Typhoon Bavi turned westward as days went by. 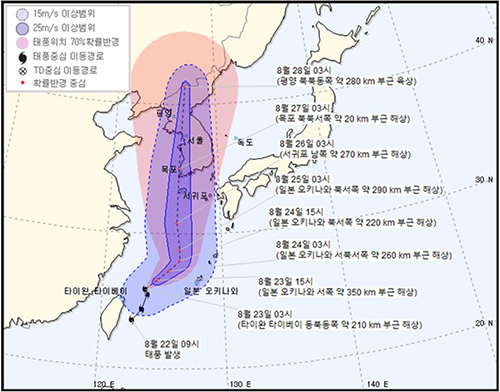 It was enough to thank the Lord on that account, but I prayed again to Him to divert its path just a little bit more. While I was praying, I heard the loving voice of Jesus at 3 a.m. on the 25th (of August). 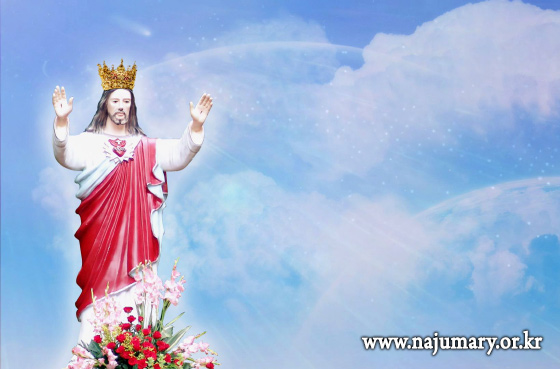 Jesus : “My extremely beloved little soul!
It has been ten years since I asked you to fill a little bit more the Cup of the Sufferings which you had been filling with your bleeding sacrifices and reparations as a victim soul.

You, who have already been ravaged over by all kinds of pains, are offering countless suffering graciously by turning your daily life into prayers and practicing the Five Spiritualities for the conversion and salvation of sinners. By doing so, even when you are only breathing, many souls can receive the grace of their salvation. Furthermore, you are working by exerting all your heart and efforts (碎首灰塵) to save even one more soul by offering up countless pains accompanying you now, to the point of double deaths, as if live flesh is cut out from you, combining them with My Pains and My Mother’s for the salvation of this world. Thus, I am comforted (by you), but at the same time, it is too pitiful beyond words.

My beloved, adorable baby!
Amid this world that is situated in the crisis of destruction, the sacrifices you are offering are so sweet that even God the Father is moved and become the consolation to My torn Heart and to My Mother. So how would I not grant your prayers offered with death throe that you are graciously offering up? I will always be with you! 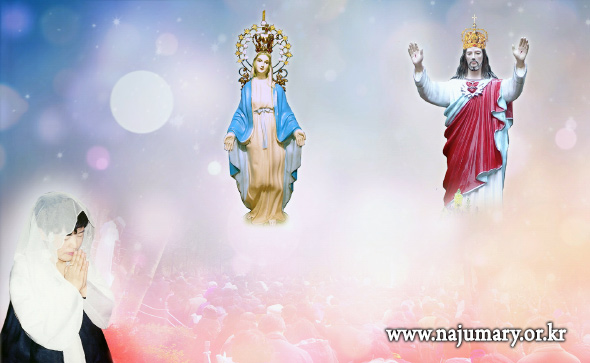 Daughter! I will make this typhoon divert its path as you wish. Yet, how can those people, who are weak in faith and ignorant of your prayers of love, sacrifices, and reparation offered to the point of crossing death, come to know about it? The secular people will laugh at the National Weather Service, but you(plural), who have been privileged to know the secrets of the Kingdom of Heaven and those who have ears to hear, will understand. However, next time, I cannot make such promises.

My beloved little soul! Make this known to all My children in the world. My Mother and I repeated so anxiously the same words countless times what the remedy is for the numerous disasters happening around the world by showing a lot of unprecedented Signs consistently through My little soul.

Nevertheless, if the children in this world have no fear of God's just wrath, but offend Him without accepting the Messages of Love, ignoring the warnings of disasters, the cup of God's wrath will fall upon the world. 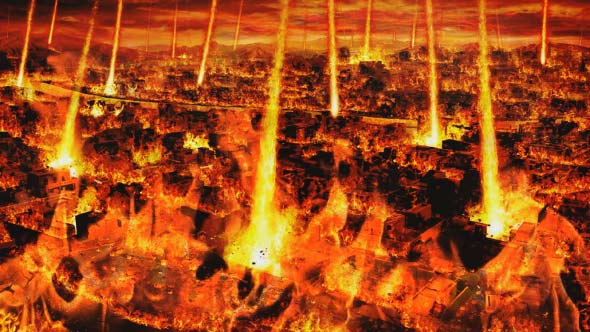 Therefore, keep in mind that you should not be separated as the empty grains, but practice and spread the Five Spiritualities by embracing the Messages of Love that My Mother and I have given to you so that even one more soul may repent and be saved as good grains. 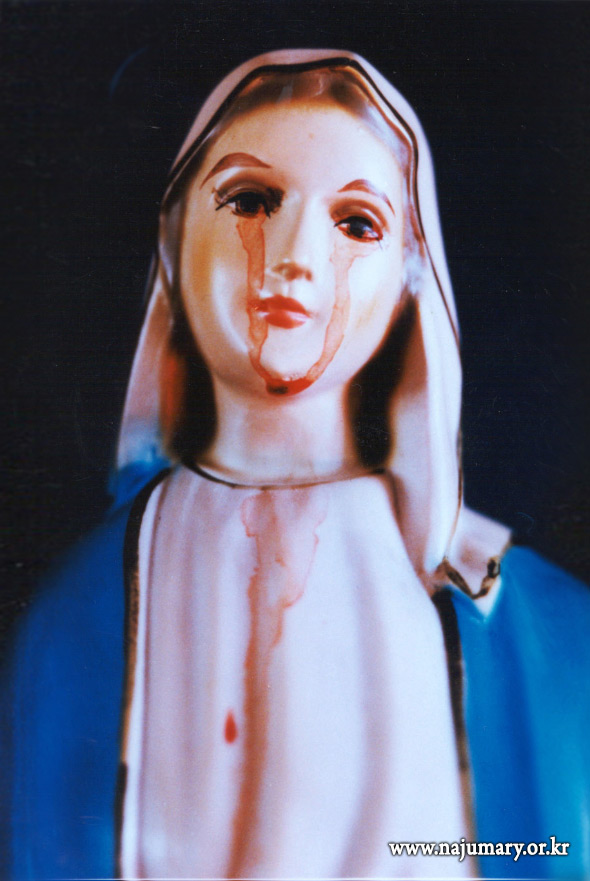 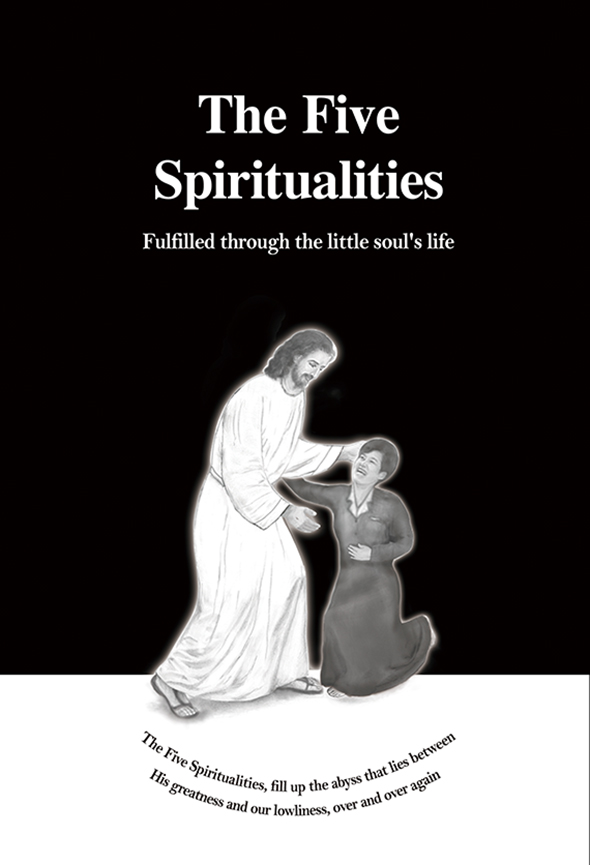 In the world today, families are falling sick and corruption is becoming more serious in society and even within the Church. However, the majority of the superiors in the Church and the political leaders whose duty is to correct the problems, are slandering one another, fighting with each other, falling into conceit (僭妄) and throwing false accusations at others (讒構), yet uttering unjust words as if they were reasonable and correct. (牽强附會)

It has come to the point that even the ones who are supposed to play the role of the captain of sailing ships, are doing the mudslinging (泥田鬪狗) at one another by turning themselves into slaves to power and pleasure, thus rushing toward Hell with their spiritual blindness and deafness. Subsequently, what will happen to the flock of sheep that has been following them? How would God the Father not be enraged? Because of the selfish and evil ones who persist with their ego, the people who are good are suffering and being harmed.

When Nineveh repented by listening to Jonah, God the Father changed His mind and did not destroy them. But as they indulged themselves in doing evil again, and did not repent while ignoring the warning from God the Father, powerful Nineveh, which had conquered the world (制霸), was destroyed cruelly and finally collapsed, was it not?

Likewise, God has given one more chance by saving My little soul. But if the world will not repent to the end, ignoring God’s warnings which are happening all over the world and even the shepherds who are supposed to play the roles of captains become hounds (走狗) of the devils who lead to destruction, the world may not be able to escape the disaster of burning sulfur fire and could turn into ashes; just like Nineveh had disappeared without a single trace by the wrath of God.

Therefore, at least you who know Me should not be shaken (蕩搖) like a boat being tossed in all directions by the winds (漂船), but throw away all anxieties and doubts through great understanding (大悟撤底). Thus, help the little soul whom I have chosen, and prepare for the accomplishment of My Mother Mary’s Triumph which is not far-off with utmost devotion, mobilizing all your heart and strength. (苦心血誠) 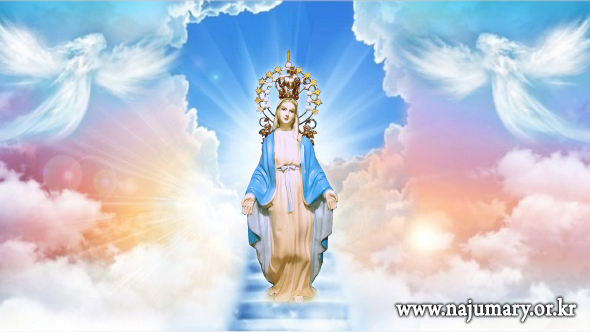 Then what I said : ‘You will see your Lord, God in this holy city prepared by My Mother and Me. On that day, I will let new wine flow on the mountain and let milk and honey overflow on every hill, and I will be with you for all eternity.’ It will be realized exactly as it was said.”

I was so grateful to hear the Words of Jesus, but at the same time I was startled because even though He has given us many Words thus far, this was the first time He said, “Next time, I cannot make such promises.”

This typhoon briefly passed over Naju without any damage. It seemed like only bleak winds and showers. Contrary to all expectations, the typhoon passed through Korea with not so much damage, Until I completed writing this Message, I have offered various pains. While writing this Message, how much I was attacked by the devils that do not want this Message to be released publicly. I barely managed to complete it, offering up the pain of crossing death both spiritually and physically for several days and nights.

‘My Lord, for whom nothing is impossible! Thank you for Your answer to the prayers of this unworthy sinner. Praise, thanksgiving, glory and adoration to You Lord, forever and ever. Amen.’ 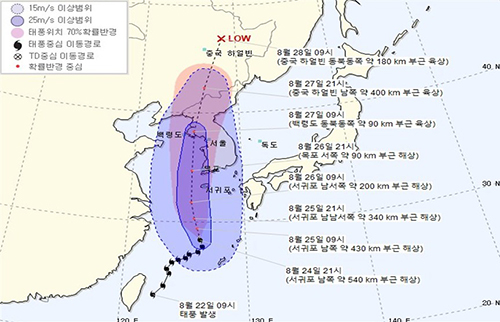 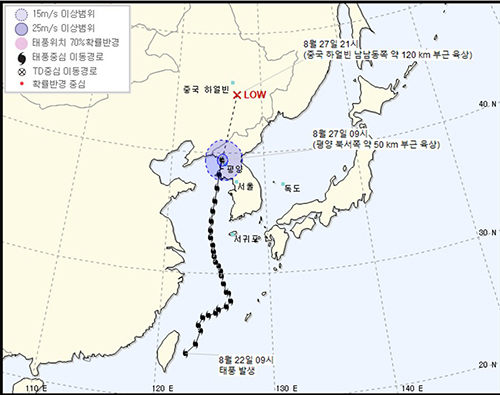 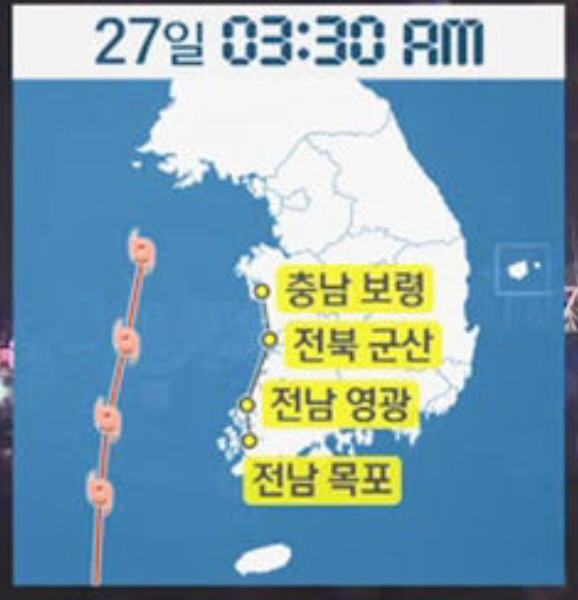 Chinese idioms used in the Message

碎首灰塵  : To break the head and make it into ashes and dust. It means to exert all true heart and efforts.

僭妄 : To be presumptuous and unreasonable. To be self-conceited and arrogant.

讒構 : To entangle others into awkward situations and hurling false  accusations on them.

牽强附會 : To use unreasonable words with the intention to take advantage of.

泥田鬪狗 : Mudslinging. A dog fighting in the mud. It’s comparable to using despicable tactics in a quarrel for one’s own benefit.

制霸  : To conquer and dominate, the power to widen one’s influence by pressuring another country with economic power or armed force.

走狗 : A hunting dog. It’s comparable to a person who is used as a tool.

漂船 : A boat that is being tossed in all directions by the winds.

大悟撤底 : To receive great enlightenment, by overcoming all anxieties and doubts.

苦心血誠 : Striving with your whole heart, strength, and utmost devotion.

0
June 23, 2021 - I will give the blessing of the Light of My Mercy and Love emanating from My Sacred Heart to save them all. April 19, 2019 - This world, which has gravely offended God, makes the chastisement by God unavoidable.
List New post