I dragged my painful body to the overnight prayer meeting to remember the First Saturday and prayed the rosary walking on the Way of the Cross from about 10 p.m.  I prayed earnestly under the Crucifix on Mt.Calvary together with the pilgrims who were gathered having responded with Amen to the call by the Blessed Mother who had said, Let us pray together on this night which is the time for passing from Death to Resurrection and for crossing over from Death to Life.

I am so anxious, because the Lord and the Blessed Mother have given us the messages of love even showing unprecedented signs, but so many people in this world, especially even the great majority of the clergy and religious who have been called, are spiritually blind and deaf and are unable to see or understand.  I am so weak and unworthy, but pray offering up all my pains for those who are spiritually blind and deaf and, therefore, cannot see even though they have eyes and cannot hear even though they have ears.  Intervene personally to open their spiritual ears and eyes so that they may understand correctly the words of the Gospel that the Lord gives us, accept well the messages from the Lord and the Blessed Mother, and thereby become capable of leading the herds of many sheep to Heaven . .

"My beloved little soul!
The numerous children who see again and again but cannot recognize and hear again and again but cannot understand are spiritually blind and deaf and have joined forces with the Red Dragon, the enemy, and together have formed a world of disorder, which is like a desolate desert.  Nevertheless, God the Father is holding off the cup of just wrath, because there is a little soul like you, who prays ceaselessly for the conversion of sinners and makes sacrifices and reparations asking that the scales that are covering the eyes and ears of those souls who are spiritually blind and deaf may be removed and they may be healed, and the little souls who are imitating you.

At this time when I am screaming together with My Mother until Our throats become torn even showing unprecedented miracles, but even the great majority of the clergy, instead of defending the truth, are joining in spreading the errors, and, thereby, are earning the just wrath of God the Father, I receive consolation from the bleeding efforts made by you who have responded with Amen to My Mother's call, have drawn closer to Me, and are graciously offering up sacrifices and reparations and also from the children who are praying with you."

At that moment, it became dark before my eyes and I felt some things slipping out of my eyes.  Then, I heard the beautiful and kind voice of the Blessed Mother from the direction of Jesus on the Crucifix.

If you pray harder and offer up more sacrifices and reparations for the Pope, the eldest son of the Church, the number of priests who will walk with the Pope on the road which My Son Jesus walked from Bethlehem to Calvary will increase. As the pains of reparations through the sacrifices that you offer up will never be wasted, display the power of love more energetically, be immersed completely in my love with which I have wished to unite with you, and do your best in heroically rendering your devoted service.

The proud and cowardly pessimists, who have lost their sense of direction and are wandering, cunningly talk about love holding the opened Bible in their hands before the public, but, after they turn around, commit an antinomy of causing divisions by sowing discords, which is inconsistent (with what they say before the public) and are playing both the role of Cain and that of Judas . . .

When they say that they do God's work but actually commit the sins of sacrilege and wickedly and cruelly slash you repeatedly with swords and afflict you, I want you to become one with my Heart and graciously offer up your bleeding pains so that the children who are spiritually blind and deaf may truly repent, may not fall into the sulfuric fire, and may be saved.

My poor daughter who has to suffer pains for the conversion of sinners!  In this current age that has become as corrupt as it can possibly get, even the Church leaders, who are supposed to play the role of the captain of a ship that sails, have become spiritually blind, deaf, and crippled, have brought about on themselves the chastisement, and are walking toward the way of destruction.

So that these souls, who are interfering with and criticizing the execution of the plan of salvation being unfolded by my Son Jesus and me and are judging it with pride and greed, may empty pride from their minds, I wish that these souls be offered up to me through your suffering.

My beloved children who have responded with Amen to my call!  By arming yourselves by turning your whole life into prayers, which will lead your spirituality to humility and perfection, become lowlier and achieve unity with love so that you may gain victory over the devils of division that fill the sky and the earth.

That is because there should never be an occasion when you only see a splinter in your brother's or neighbor's eye but do not realize that there is a wooden beam in your own eye, fall into narcissism with your self-centered thoughts, judge everything with negative thoughts and condemn it with prejudice.

Children!  There is no time to hesitate or procrastinate.  In this dangerous time when the violence of the cunning Satan is spreading errors and distorting (the truths about Naju) into a heresy through the clergy who even reject the Eucharistic miracles that the Lord has worked in Naju with human thoughts and judgment so that even the fervent faithful reject me; and is leading the herds of numerous sheep who follow them (these clergy) to the road to Hell, there is no time to hesitate or procrastinate.

Cry out in haste.  I have already told you that judging, criticizing, and condemning paralyze all the actions that could become virtues and that not trusting and doubting annihilate the faith, but even many of the shepherds remain spiritually blind and deaf and unable to discern, are quick about criticizing others while covering up their own faults, and behave in cunning and flattering ways to satisfy their worthless secular desires, making the damages to the souls who follow them extremely serious.

Settle down deeply in this Mommy's Heart that has become a live volcano that flames up violently because of this, and, with a firm belief that all of them can also be saved, spread the love in my Immaculate Heart vigorously and courageously.

Then, you who work to help my specially called daughter will stand by my side with the power and privilege to pick and eat the fruit from the tree of eternal life in Heaven on the last day and sing glory and alleluia to the Lord, escorted by the angels."

Photos taken on July 7, during the First Saturday Prayer Meeting 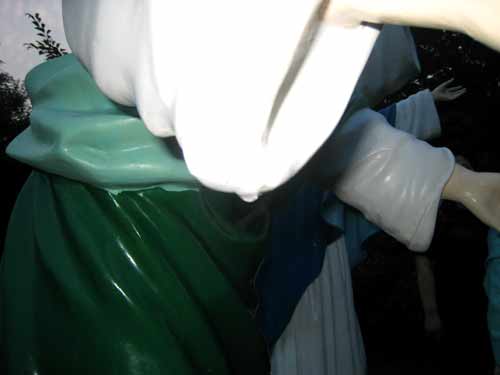 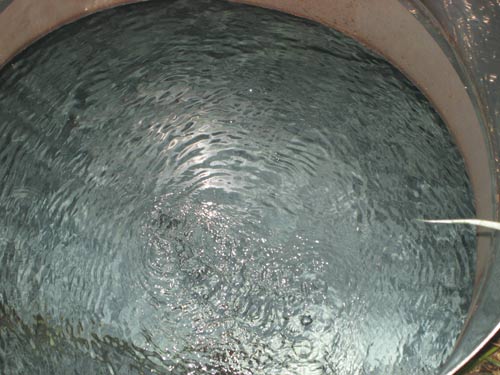 The miracle water of Naju is moving by itself, creating waves. 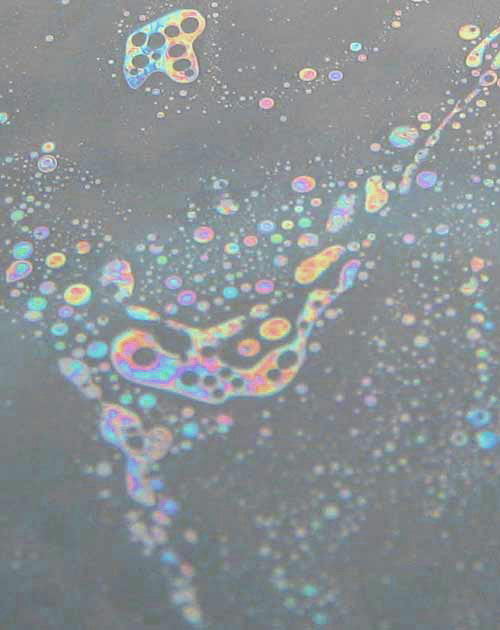 Colorful fragrant oil floating on the water of graces. 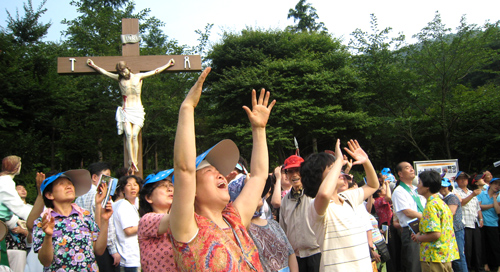 Pilgrims exclaiming with joy over

the unusual phenomenon of the Sun. 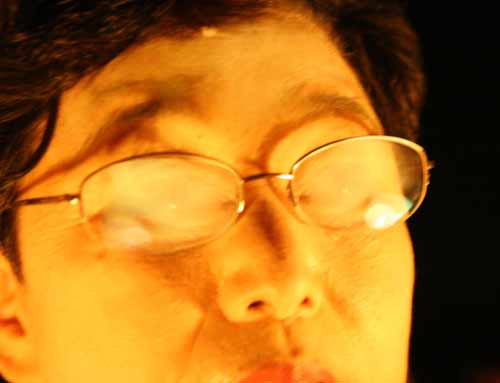 Some drops of water continued to exude from the side

and left knee of the image of Jesus. Thanking the Lord for His most

sublime and highest love, Julia prayed earnestly that He might remove

the scales covering the eyes and ears of those souls

who are spiritually blind and deaf. At that time,

The glasses of those around were all clear,

which stunned the pilgrims present 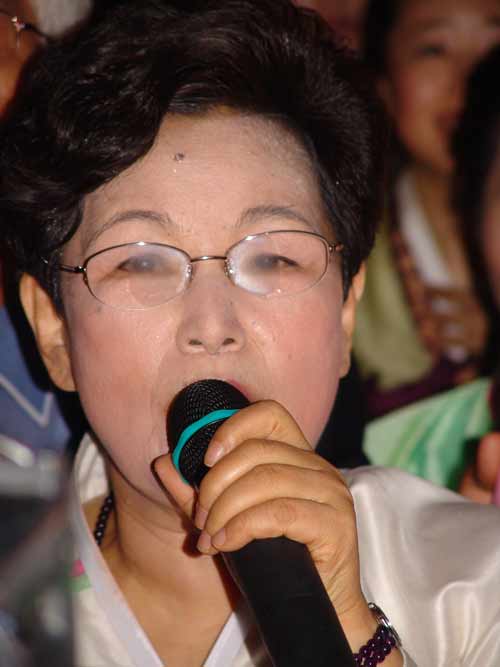 Julia praying that the Lord might remove the scales covering

the eyes and ears of those souls who are spiritually blind and deaf.