The pains that I have suffered over the last Lenten season have further intensified year after year, but during this Lent, my redemptive suffering has reached the highest level where I have expected death every day.

On Holy Thursday, April 18th, when Mass ended on the Blessed Mother’s Mountain, I ardently asked Jesus and the Blessed Mother, ‘O Jesus, a Teacher Who lays down all of Himself! On this day which is the Holy day for priests, please grant them the sublimest love that You showed to the disciples at the Last Supper so that this world which deserves punishment can be saved.’

At that very moment, Fragrant Oil and Thick Mother’s Milk came down in large quantities in the waiting room where I was praying. These were Signs from the Lord and the Blessed Mother answering my prayer. 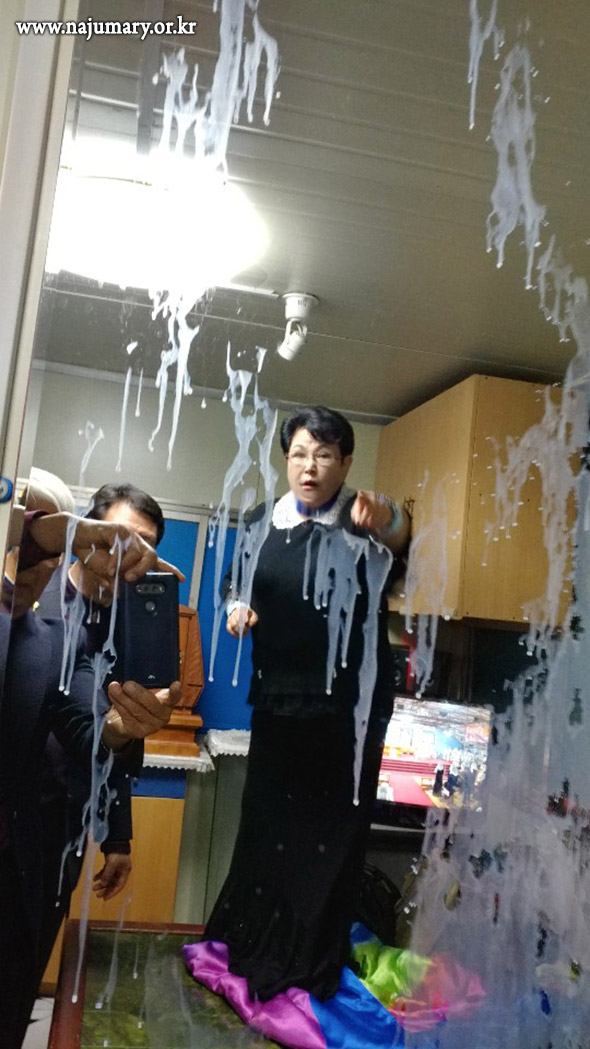 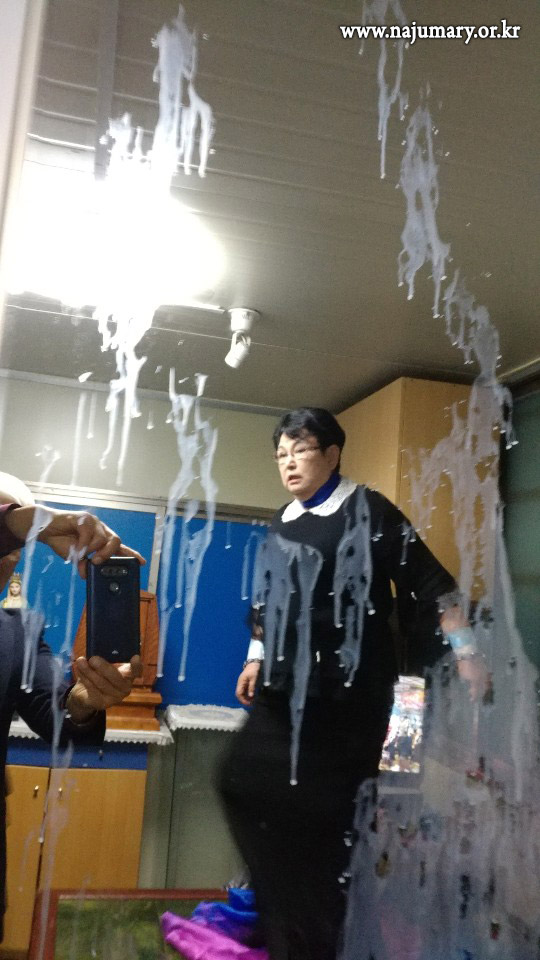 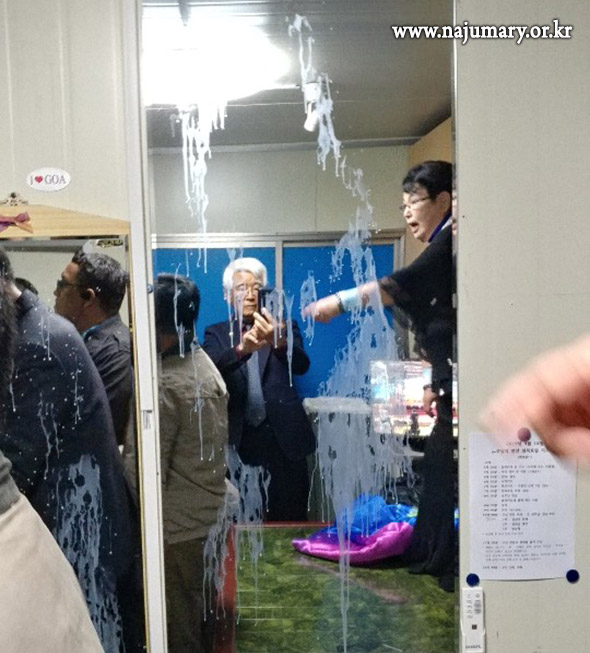 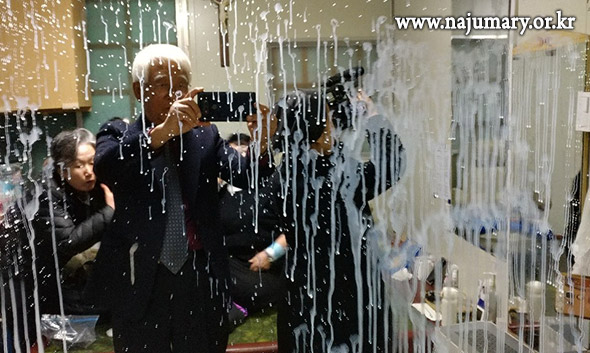 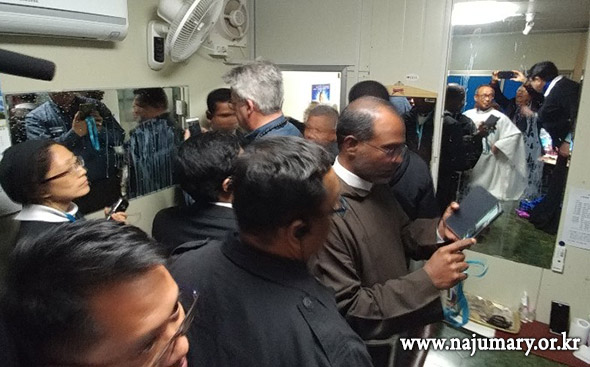 Several priests came in and witnessed the Signs. While they were giving thanks to the Lord, the large amount of the Fragrant Oil and the Thick Mother’s Milk gradually disappeared before the eyes of all those who were present. It was not that the oil and the milk just disappeared. In fact, Our Lady fed Her milk to us as nourishment out of Her purest and sublimest love, so that all of us may grow spiritually and physically.

Thick Mother’s Milk that came down at 22:42 p.m. disappeared around 22:55 P.m. At 3 p.m. on Good Friday, foreign priests and pilgrims from 14 countries, who did not mind the long distance to come to Naju, began doing the Stations of the Cross together with the domestic pilgrims.

When I was praying under the crucifix at Mt. Calvary, my ears started hurting as if they fell off from me under an exceptionally strong wind, I felt so extremely cold until my whole body shivered.

Suddenly, a sharp whip struck my whole body consecutively and then, I felt as if countless big nails have been piercing my whole head. I offered up the suffering, kneeling and lying face down on the rock under the crucifix, burying my head in my hands. I prayed; ‘Jesus! I am now offering up any pain joyfully, but let this suffering of mine be invisible.’

At that moment, I came to see a vision: Jesus was wearing the Crown of thorns. When a Roman soldier struck the crown with a club here and there mercilessly, the thorns were being driven deep into His Head. After that, the soldier took off the crown whose thorns already had been stuck on His head. And then he pressed it down again on His head and struck it with a club here and there many times. Whenever the soldier repeated this torture, Jesus was shedding blood in the middle of His terrifying pain. While I was participating in the pain of the Crown of thorns of Jesus, the blood continued to flow down from my head, but the visible blood shed was much less than my actual bleeding. At the moment, Jesus sent down His Precious Blood and the Blessed Mother sent down Her Fragrant Oil and Thick Mother's Milk.

(Translator’s note: Julia asked the Lord that the pains she suffered would not be shown externally, so the bleeding caused by scourging on her body was invisible, but her whole body was in pains to the extent that she could hardly move at all. In the meantime, the bleeding caused by the Crown of thorns was somewhat partially exposed visibly so that people can see and know that Julia was participating in His Pains, while receiving message) 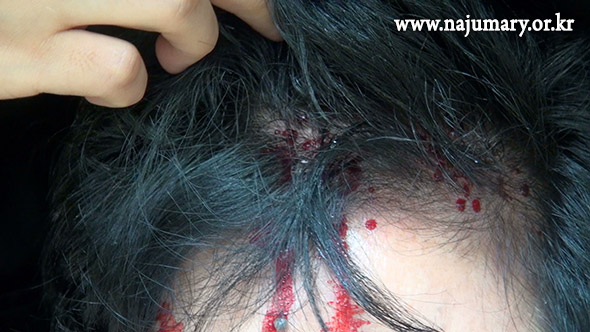 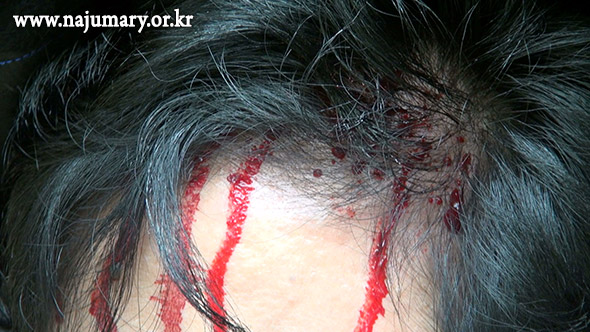 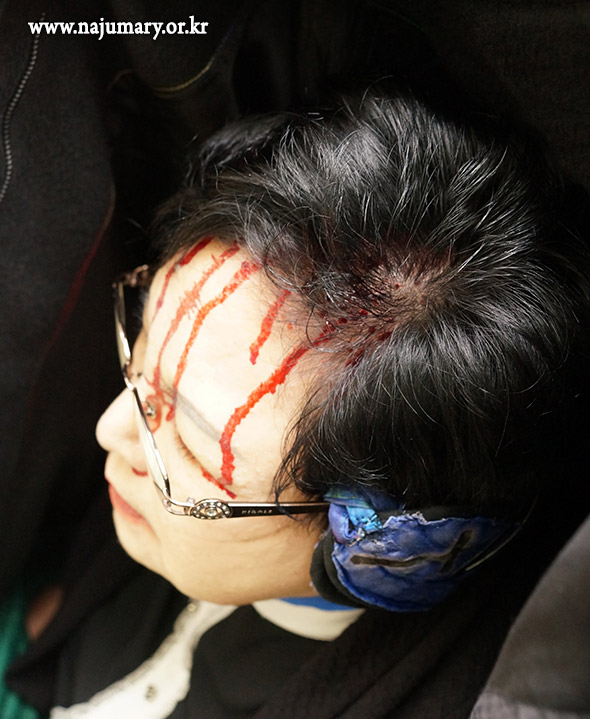 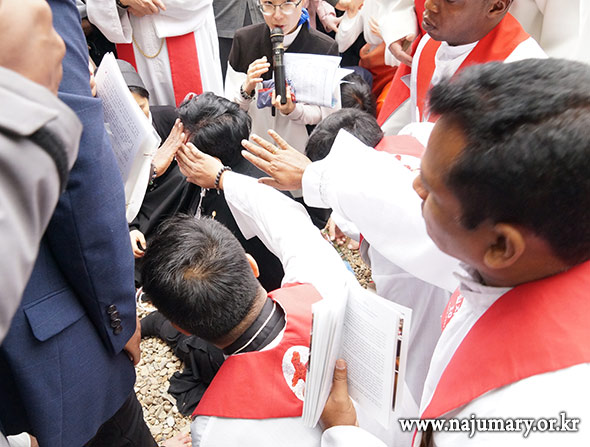 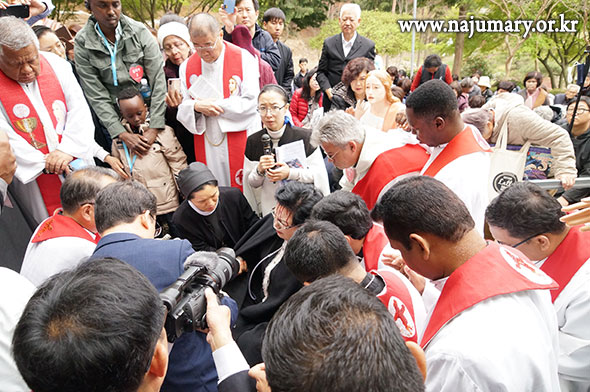 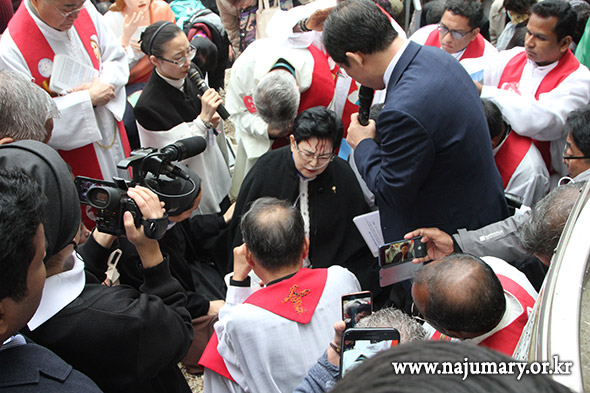 Julia suffering from pains of the Crown of Thorns and receiving
a Message before the Crucifix at Mt. Calvary during the Stations of the Cross 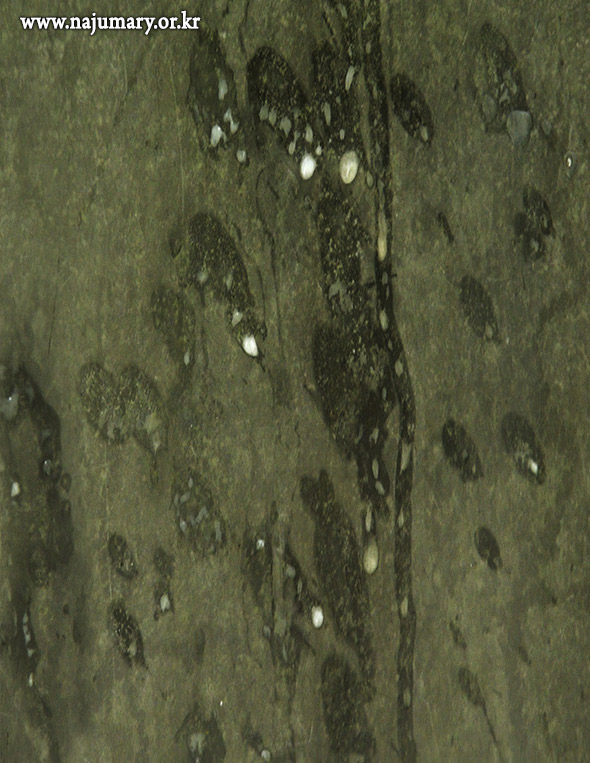 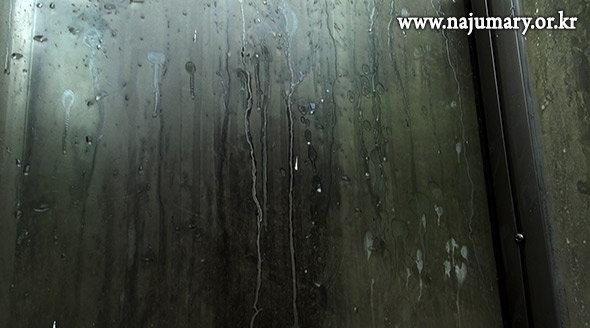 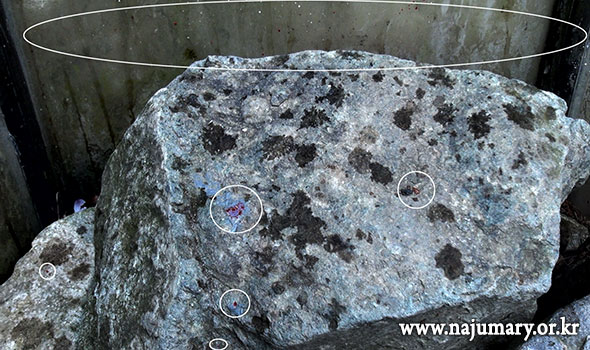 Precious Blood, Fragrant Oil and Thick Mother's Milk descended
when Julia was participating in the suffering of Jesus and receiving Messages 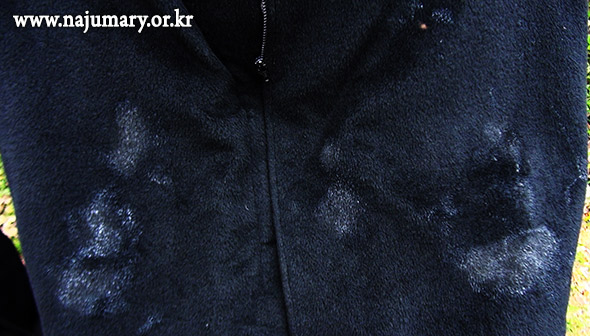 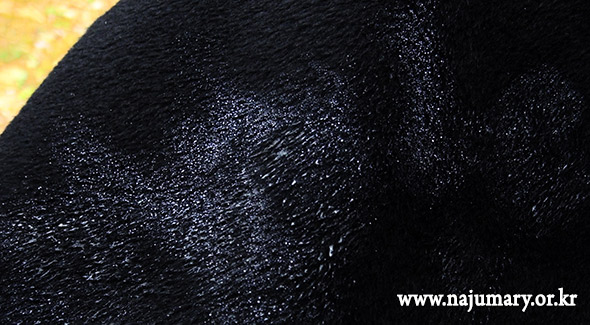 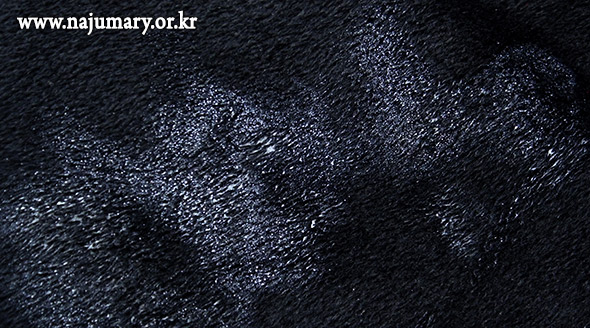 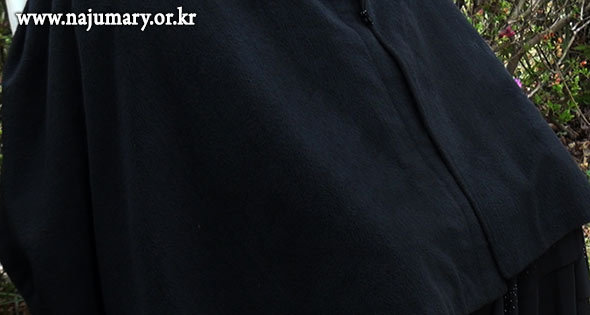 Thick Mother's Milk which had descended just moments ago disappeared.
(It also means Her Milk was absorbed into all the souls.) 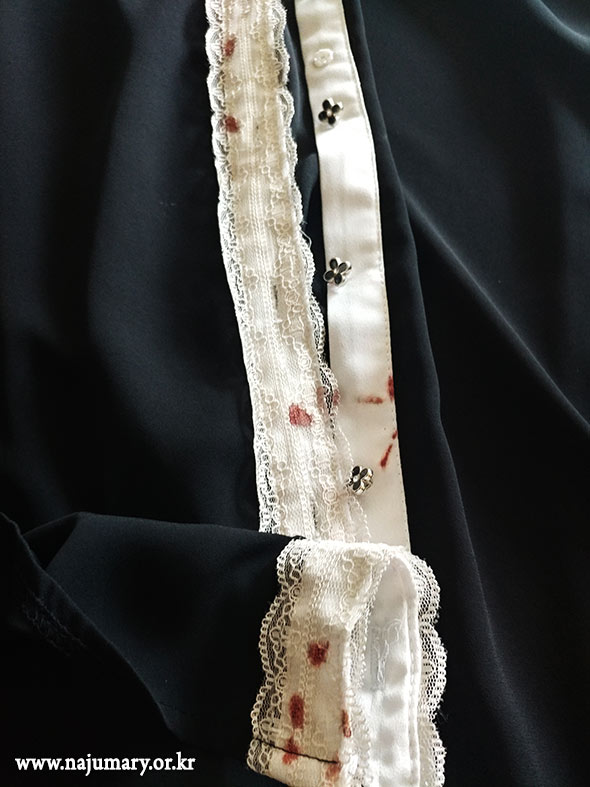 Precious Blood descended on Julia's blouse
through penetrating the mantle she was wearing.

While I was shivering under the terrible cold caused by the scourging on my whole body, the wind blew in through the holes of the wounds made by the crown of thorns. It was an unbearable suffering accompanied with my oxygen saturation sinking low. At this moment, one volunteer, the one who was well aware that I had suddenly died and gone to Heaven on Good Friday of 2016 due to hypo-thermia and respiratory arrest, was so startled that she tried to heat up my body by covering me with a mantle, a blanket, an outer garment, hot water and so on. However, my whole body was still shivering due to the cold and I had to wear the oxygen cannula because my oxygen saturation still continued decreasing.

I offered up graciously all these sufferings for the Lord and the Blessed Mother and also for the pilgrims who were gathered at this place. When Jesus was nailed and died on the Cross, the Roman soldier pierced His Side with a spear. Then, water and blood poured out from His side like a waterfall, which descended as rain of the Precious Blood over the priests and the pilgrims who were gathered and praying on the Blessed Mother’s Mountain and it was actually absorbed into them. I cried out when looking at the scene.

Julia : “Oh, my beloved Jesus, how much pain You must have felt! I only give thanks to You for pouring down all Your Water and Blood to the last drop even at this time 2,000 years afterwards, for us all who are unworthy. Why do You love sinful children in the world this much?

Jesus : “Oh, My beloved little soul! Of course, I will grant your wish. But if they close the doors of their hearts, iron-cladded with pride and self-centered stubbornness, and continue to ignore and reject My Love, I can’t force it.”

Julia : “Oh, Lord, even I feel intense pain in my heart then how much more pain would You feel, when You, who want all the children in the world to be saved, see that the shepherds whom You personally appointed are singing Alleluia with their lips, but are also distracted by so many useless, tangled thoughts (胡思亂想), and are thus frustrating and depressing You (觸目傷心) with all their preposterous rumors and accusations (附言浪說)? Even though I’m a very unworthy, weak, and trivial sinner, please make use of this pain of mine and my blood without missing any drop of it for Your glory.”

Jesus : “Of course, I will. I am going to transfuse My Precious Blood with My Love into them together so that even a single drop of the blood that you shed while participating in My excruciating suffering may not be in vain.

Because you, a victim soul, responded with Amen and are dedicated as a pure sacrificial offering at every moment, God the Father said that even when you are only breathing, you are already playing a significant role in saving countless souls. It is because you graciously offer up your excruciating and dreadful sufferings by sublimating them into the Five Spiritualities so that even the most wicked sinners who deserve hell may repent and be saved.

All the clergy and children in the world who rushed to this place responding to My call with Amen! This world, which has gravely offended God, makes the chastisement by God unavoidable. Many disasters that are taking place all over the world are warnings that indicate the time of Great Tribulation is close at hand.

God the Father is delaying the time of chastisement because of the entreaty of My Mother Mary and your earnest prayers that are offered in unity with My little soul when you gather in this holy place, Naju Shrine which I prepared with My Mother.

Therefore, do not forget that you are chosen as good grains. Go help many souls get aboard the Mary’s Ark of Salvation so that everyone may be saved and that the cup of blessing may be sent down instead of chastisement.

I, Who am the beginning and the end and have the keys to death, hell and Heaven, will come to each one of you together with my Mother Who is the Queen of Heaven in the not-too-distant future, bringing reward and fire to repay each one according to their works. Therefore, hurriedly be awake and arm yourselves with the Five Spiritualities, thus enjoy Heaven.” 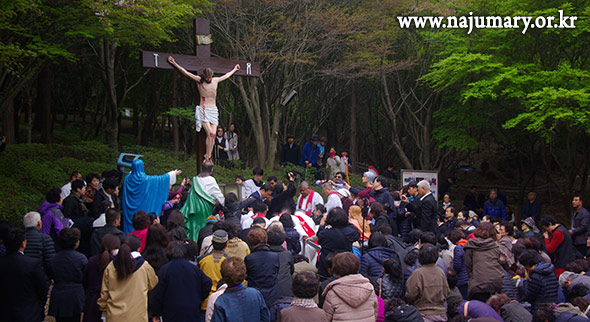 0
August 25, 2020 - If the children in this world offend Him ignoring the warnings of disasters, the cup of God's wrath will fall upon the world. October 16, 2018 - Remember ‘Gujagwanya’ (口者關也 : Chinese idiom which means that a mouth is just like a gate way, so that we must not run loose with our mouths carelessly) not to make all the laborious
List New post