Message from God the Father and Jesus received

I couldn't consider doing the Stations of the Cross today because of hypothermia which had lasted for several days. Leaving behind concerns from priests and volunteer helpers that it would be better for me to pray before the place where little rocks stained with the Precious Blood were preserved, and saying that even if I died, I would die with the Lord, I took each step arduously although it was very difficult to move even a little, and began the Stations of the Cross with five priests, several religious, and domestic and foreign pilgrims. At the third station where Jesus fell the first time and at the seventh station where Jesus fell the second time, I participated in the pains that Jesus suffered. 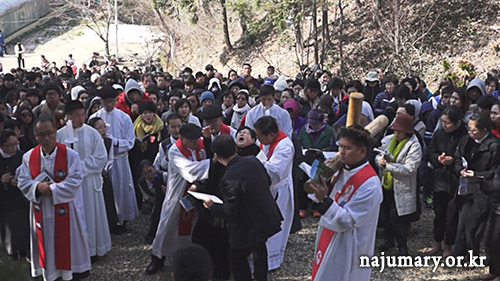 The 3rd Station of the Cross 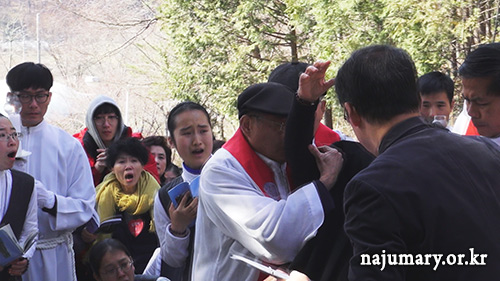 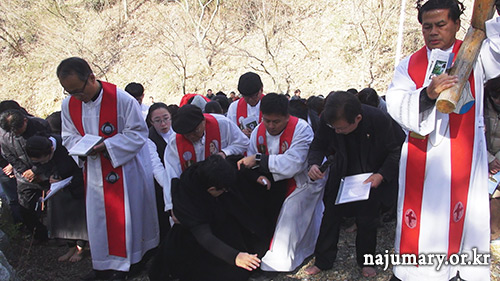 The 7th Station of the Cross 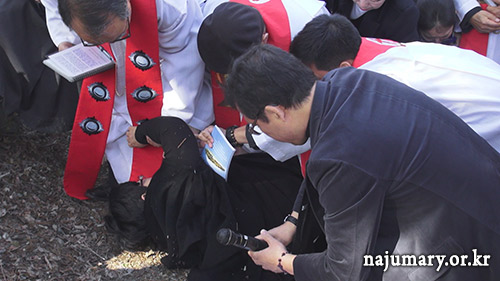 When Jesus fell the third time at the ninth Station, a big crowd jumped on him and struck him mercilessly, tearing his flesh off until blood gushed out. As I participated in Jesus' pains at that time, I unknowingly let out screams ofdeath agony several times. Soldiers stopped the crowd who were going on the rampage to kill Jesus, saying, "Stop! If Jesus dies before being crucified, we won't be able to make him suffer more cruel pains." 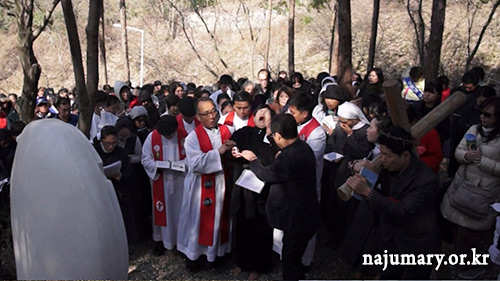 At the twelfth station where Jesus died, all fell on their knees. As I couldn't kneel due to the lymphedema of my legs, I fell prostrate on the ground and prayed. Then, cold seeped into my body from the ground and my heart, ill from myocardial infarction, felt like it was shrinking. I had suffered from hypothermia of 34 degrees centigrade from last night till the dawn. As soon as I fell prostrate on the ground, I realized that the pain of the hypothermia would begin again due to the cold seeping through my body from the ground.

I thought of getting up, but made up my mind to die with Jesus for the conversion of sinners and the approval of Naju, so I prayed, "Lord, I am yours, if I live. I am yours, if I die. As I offer up all of myself, only Your Will be done." Then, I lost energy in my whole body, became unconscious, and I felt my breath stopping. In no time, I found myself beside God the Father. 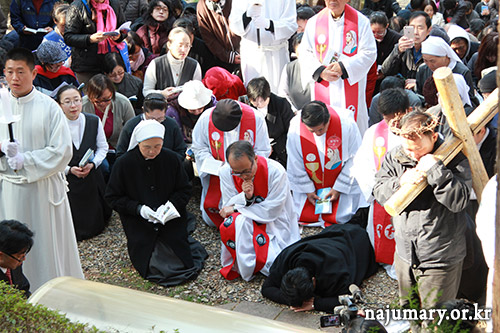 "God the Father, please take my life and save this world which has turned into a state of extreme disorder."

"Child, don't you know that there still remain many things you have to do?"

"I cannot do anything because I am so unworthy. And I wish that there would be none who commit sins because of me anymore."

"As long as you are in the world, such things[2] will continue without end. What did Jesus Christ, My only-begotten Son experience for the salvation of the human race? Didn't he receive insults and humiliation from countless people until he was nailed to the Cross and died? Even though you know it well, why do you complain like a fretful child?"

"Oh, Father, I was wrong. I will do Your Will. So, do not send down punishment on this world."

"As I see you, a little soul, who do acts of benevolence at the expense of yourself, thinking highly of the salvation of this world rather than your welfare, how can I let loose My Hand which is lifted high, blazing up with justice?"

"I am just an unworthy sinner."

"Then, go down hurriedly and do what you have to do."

I, who had been lowering my head, began to descend enfolded in a brilliant light and arrived at some unknown place. There I saw people begging who looked like lepers, their eyes and hands withered and their whole bodies distorted, oozing bloody pus profusely. All those who saw their hideous appearance ran away. Then, Jesus appeared. He called and gathered priests, asking them for help although He could help those poor people personally. Most of the priests, however, ran away and there remained only a few. But they were not willing to run to the poor people either.

I said, "Even though I am an unworthy sinner, I will try to be of help to them because You are always with me." As I ran and hugged them tightly, and kissed their bodies and breathed into them, they became clean. Then, Jesus said, "Yes, My little soul! That's it. That is why you are My love."

Descending again wrapped in a light, I reached another place, where I witnessed terrible scenes. Numerous people were committing sexual abuses and sins of obscenity, even to the extent of gnawing the flesh off other people. They, who had already turned extremely ugly, committed sins of obscenity regardless of who their partners were, men or women, young or old, all for their transient pleasures of senses.

They even victimized their own parents, brothers, sisters and young children for their carnal desires. When their family members refused to comply, they were beaten and even killed. Those who were tempted by the devils of obscenity and thus became blind with sexual desires, failed to recognize their own parents and children.

I took pity on those souls who succumbed to temptations of the devils of obscenity and thus couldn't recognize even their own children or their parents, brothers and sisters. So, in order to sacrifice myself, I rushed there and prayed. Then, those souls jumped on me and began to gnaw the live flesh off me. I unknowingly let out screams out of extreme pain, but I prayed earnestly, "Jesus, I offer up all of my body and soul unsparingly. Please let all these poor souls repent and be saved." Then, Jesus showered down the rain of His Precious Blood.

Although they gnawed the flesh off me, new flesh regenerated instantly where the flesh was torn off. When some people who were opening their hearts even a little repented with tears in my arms, their ugly faces became normal. However, from those who did not open their hearts, the Precious Blood returned back to Jesus. In the meantime, my abdomen continued to be swollen because I was offering up my pains in reparation for the sins of obscenity and abortion in order to convert them. Then, Jesus spoke in a kind voice.

"My extremely beloved little souls! Although you who come to me following my chosen little soul, who is not afraid of even the throes of double deaths for the conversion of sinners, will suffer preposterous misunderstandings, hatred and persecutions, you will not lose even one strand of your hair. Therefore, do not worry but make strenuous efforts to arm yourselves with the Five Spiritualities everyday and every moment. Then, you will reach perfection by giving birth to holy virtues and gain eternal life. On the last day, you will stand beside My Mother and Me along with my little soul."

Then, light shining from Him, Jesus gave a blessing toward the Blessed Mother's Mountain where the five priests and pilgrims were praying. At that very time I opened my eyes, giving thanks to God and praying 'Glory be' with the angels. The priests and pilgrimswere also praying the same 'Glory be'. After the prayer, I found that much of the Precious Blood had come down, penetrating my black clothes, and that there were many wounds on my head, causing me pain to the point where I couldn't touch it. Indeed, all of my body became a mass of bloody wounds. But I found that my hypothermia had disappeared. Glory, praise and thanks be to the Lord! 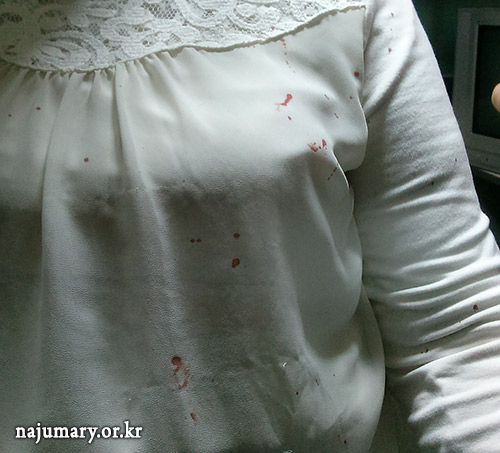 In this conversation, God the Father scolded Julia slightly in love, because she didn't take good care of herself and laid down her life again despite there being still many things for her to do in this world. She just prostrated herself on the cold ground while still suffering from hypothermia and enduring severe pains in order to beg for the conversion of sinners and the approval of Naju. So, this is an intimate conversation between God the Father and Julia.